The revenue source for state transportation dollars is similar to that of federal transportation dollars; it comes through gas tax revenue. Prior to 2017, the state gas tax in California was a $0.18/gallon base tax, and a variable price based tax. Since the passage of the Road Repair and Accountability Act of 2017, also known as Senate Bill 1 (or SB 1), the gas tax has increased to $0.30/gallon, along with an increase in diesel taxes, vehicle registration fees, and an electric vehicle registration fee. These increased revenues have helped to augment existing programs and created new grant programs.

Administered by the California Transportation Commission (CTC) and STA

Funds projects that maintain operations on the State Highway System. SHOPP funds may only be used for rehabilitation, and not for expanding capacity. Funds are programmed and spent by Caltrans. Example projects include repaving and bridge replacement. Funds are programmed every two years, covering four fiscal years. The last programming occurred in 2018, and Solano County will be receiving 8 projects in the 2018 SHOPP, including:

Administered by Caltrans and MTC

The Active Transportation Program is the largest funding source for active transportation projects in California. Funds projects such as bike paths, bike lanes, pedestrian facilities, bicycle/pedestrian planning, and bike/pedestrian education & outreach. Call for projects typically occur every two years and occur in two rounds: the first round is a statewide competitive call administered by Caltrans, and the second is administered in the Bay Area by MTC. The current call for projects, Cycle 4, includes $440 million in available funding statewide over four fiscal years. This is double the amount of previous years due to the passage of SB 1. Example projects include:

Caltrans transportation planning grants help to further local and regional multimodal transportation and land use planning that contributes to California’s GHG reduction targets. Requirements and project types differ for each one, but generally include the following:

Strategic Partnerships: focuses on plans and studies that require partnerships with Caltrans, or other local government agencies.

Caltrans typically holds calls for projects for these grants once per year. In 2017, STA was awarded a $350,000 Sustainable Communities grant for the Solano Active Transportation Plan.

Provides funding for local safety projects that will reduce crashes and fatalities on public roadways. Projects must be identified based on crash experience, crash rate, crash potential, or other data based means. Projects eligible for HSIP include (but are not limited to): pedestrian crossing improvements, guard rail extensions, pavement or shoulder widening, traffic calming, etc. Currently, STA is working with each member agency to submit up to three HSIP applications per jurisdiction for Cycle 9 of funding, which is currently open. In the past, the County of Solano has used HSIP funds to enhance safety at intersections on rural roads.

Administered by the California Office of Traffic Safety

The California Office of Traffic Safety (OTS) is a state agency whose goal is to eliminate traffic deaths and injuries. They provide grants to local agencies to enforce traffic laws, educate the public on safety, and provide other effective methods for reducing fatalities. Grant applications are due in January annually. STA was recently awarded an OTS grant to conduct a pedestrian safety program, focusing specifically on Vallejo.

Several transportation-related grant programs are funded by a State of California program known as cap and trade. Large polluting electrical plants, industrial plants, and electrical distributors are required to purchase carbon credits through an auction format that specifies the amount of pollutants the plant may emit. The state sets a cap on the number of carbon credits that may be purchased through the auction format; anything remaining must be traded among the businesses. Proceeds from the auctions go towards projects that help to reduce greenhouse gas emissions in the transportation sector, natural resources sector, and clean energy sector. Transportation projects funded with cap and trade funds include the California High-Speed Rail project, rail/bus/ferry projects, and active transportation projects. 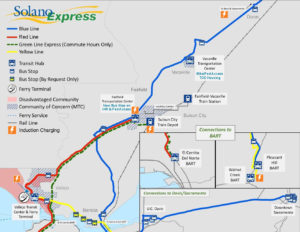 Administered by Caltrans and the California State Transportation Agency

Funds large, transformative projects that modernize intercity, commuter, and urban rail systems, as well as bus and ferry systems. Last call for projects included over $2 billion in available funding. In 2018, STA recently received $10 million in funding from TIRCP for improvements to the SolanoExpress system.  In the most recent cycle of TIRCP, STA was awarded $10.4 million in funding for improvements to regional transit facilities, including:

Provides operating and capital assistance to transit agencies to reduce greenhouse gas emissions and improve mobility. Projects eligible for LCTOP include new or expanded bus/rail service, expanded transit facilities, or equipment acquisition. 50% of the funds are allocated to regional entities, while the other 50% is allocated directly to transit operators. Fairfield-Suisun Transit has previously received this grant to purchase diesel-electric hybrid buses for their local bus routes.

Administered by the California Department of Housing and Community Development

Mostly funds projects related to parks and the beautification of urban environments. However, one of the eligible projects is to landscape off-street paths, such as bike trails. Rio Vista unsuccessfully applied for this grant to landscape the existing Airport Road bike path.