What is a Regional Transportation Impact Fee?

A transportation impact fee is established by a local or regional government (usually collected during issuance of the building permit) in connection with approval of a development project for purpose of defraying all or a portion of the cost of particular public facilities, in this case, transportation projects (e.g., roadway expansion, transit centers, interchanges, etc.). Regional Transportation Impact Fees (RTIF) are used in a variety of counties throughout the State of California to help fund transportation projects. 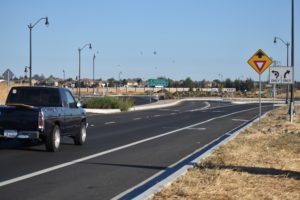 In 2013, the Solano County Board of Supervisors approved an update to the County’s Public Facility Fee (PFF) that included a $1,500 per dwelling unit equivalent allocated toward the STA’s RTIF program. 5% of the funds are spent on regional transit improvements, another 5% goes to unincorporated county roads, 2% to STA administration, and the remaining balance is returned to the RTIF district in which it was collected. Solano County is divided into 5 RTIF districts, loosely defined as follows: District 1 – Jepson Corridor; District 2 – State Route 12 Corridor, District 3 – South County, District 4 – Central County, District 5 – State Route 113. Example projects funded with RTIF include: