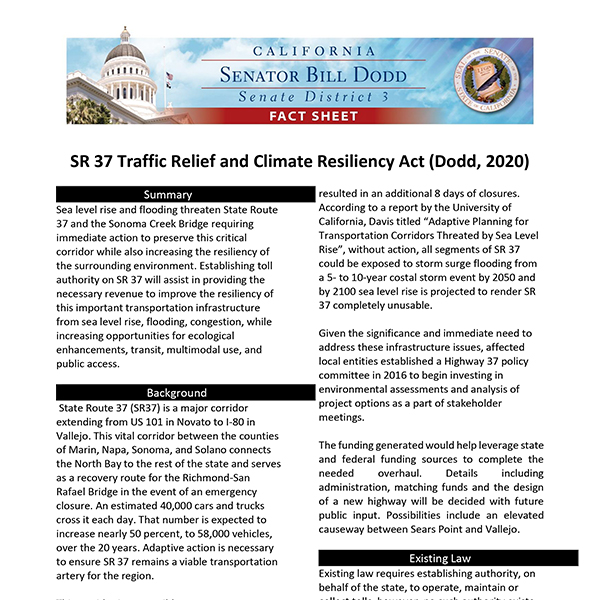 “The time is now to improve this essential artery that connects us to jobs and supports our economy,” Sen. Dodd said. “If we don’t act, increased traffic and sea level rise will make an already bad situation simply unpassable.  Without a dedicated revenue source, the problem won’t be fixed in many of our lifetimes. I introduced this bill to increase capacity for today’s commuters and make the route sustainable for future generations.”

Highway 37 runs along the northern edge of San Pablo Bay, serving as a critical connection for Sonoma, Solano, Napa and Marin counties. An estimated 40,000 cars and trucks cross it each day. That number is expected to increase nearly 50 percent, to 58,000 vehicles, over the 20 years. At the same time, a recent UC Davis study found that sea level rise will make the highway impossible to use by the end of the century, with serious periods of flooding expected annually in the coming decades.
The bill will create a tolling authority to raise capital for necessary improvements. The funding would help leverage state and federal funding sources to complete the needed overhaul. Details including administration, matching funds and the design of a new highway will be decided with future public input. Possibilities include an elevated causeway between Sears Point and Vallejo.

The proposal is supported by stakeholders in Sonoma, Solano, Napa and Marin counties. The bill was announced today during a 10 a.m. press conference at highways 37 and 121.